“..are you sure? That I can just go there to get one of the kitten?..” it was surreal, a friend of mine, he wish to give his newly born baby cats away, he said there were three babies, two which is similar color with the mother, which is grey-blue-ish in one color, and one with white and other white-brown-black-ish color. “..i take the white-brown-black-ish color one..”
I used to have a cat before, 4 years ago, he disappeared a month after we relocate to a new place, and from what I’ve read and being told, cat attached to the house instead to the owner. So taking another cat is another scare factor for me, of losing another lovely pet, because I have to face the fact that I would still can easily be moving from the place where I live now.
“..one of the babies, is already being taken by a friend of mine, and now there is only two babies left..” he said to me. So I make a date to visit him, it was 21st of March, Saturday, my free day from work.
Took me for a little less than 45 minutes to get to my friend place, it can be faster if I take a motorcycle though, but driving a motorcycle with a little kitten, not a good combination, it can cause a stress and dehydration to the kitten. I ask a friend who own a car to borrow the vehicle to pick up the kitten. And she wanted to drive with me instead, which is good, so I don’t have to drive on my own.
When I arrived, my friend welcome us, my eyes were leering at the grey-blue-ish color one, he is so very active kind of cat, he kept playing with the mother tail. While the father were sitting close to where I sat.
“..where is the mix one?..” just right after I finished my question, there is this scare looking kind of cat, walking from the kitchen, he look confuse and scare. He is rather quiet, unlike the other one who kept jumping and playing around.
“..hi Adek..” I walk toward him, he is just looking at me, maybe he wanted to run to the kitchen again, I try to reach him but still giving him a distance to smell me. I move a little closer, he raise his face and smell my finger. I pet his forehead slowly. When I pick him up, his body is all tense, maybe because he is scare, how come a new human picking me up. I walk to where I sat before, and put him sitting on my lap, my hand still slowly petting his forehead moving backwards, over and over.
Adek, is a name I always give to my previous cat, and I intend to call this one Adek too. In Indonesian language, Adik mean little brother or little sister. And changing the letter from I to an E, doesn’t change the meaning. I always consider my pet like my own little brother.
On our way home, Adek were rather miauwing loudly, I put him in this carrier that is way too large for his size, I borrowed it from the owner. I tend to buy a smaller carrier him. I believe it is freaking him out, with the spacious locked room, and the sound of the car engine. I kept looking at him in the back seat, sitting scarily.
When I arrived in my place, I open the carrier, and he run out immediately and hide behind the couch. Poor little kitten, have no idea what to expect and what is going on. It is just strange to him it must be. I then prepare his food and water in the separate bowl.
When I try to reach him, he is hissing at me, with his position to attack. “..well, this is my home, and now it is you home too Adek..” I know the consequences but I still trying to reach him and get him out from the corner. The moment I feel his forehead in my finger, I grab him, and take him out from the little corner between the couch and the wall. His body as tense as the first time I picked him up. I put him near the bowl of his food and water, he look at me, with strange kind of looking. He then drink from the bowl.
“..welcome home Adek..” 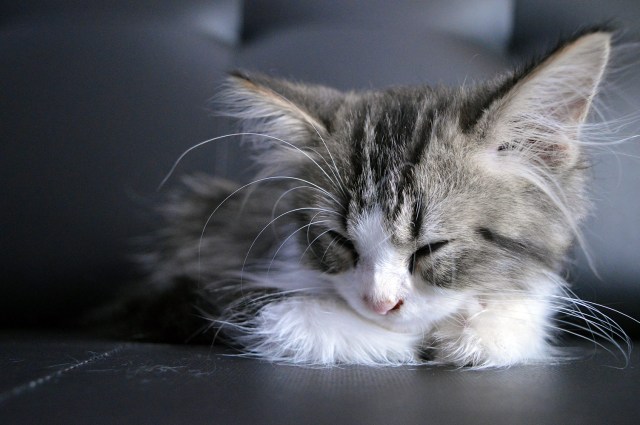 enjoying the article? let your friends read it too